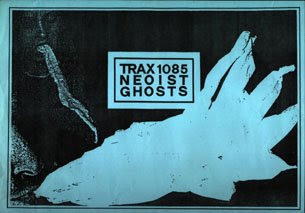 To answer L'étranger's question about "Basis Orguna / AKAUCN": No, that tape is not the same as "TRAX 1085 Neoists Ghosts". The proof is in the pudding, or rather: in this posting. "TRAX 1085 Neoists Ghosts" was edited and published by the Italian mail artist and underground musicia Vittore Baroni in 1985, two years after his tape Area
Condizionata 3: Videogames For The Blind. It was the final "post-mortem" release of his legendary TRAX label, made in a period when he actively participated in Neoism (and ten years before having his hands in the similar-minded Luther Blissett project).

The download file includes Vittore's liner notes to the cassette, his obituary for the TRAX project, and selections from his SMILE/SNARL magazine published in the same year. And, in order to either avoid or perfect the confusion, "Trax 1085 Neoist Ghosts" is not identical to Hapunkt Fix's "The Sound of Neoism", another field recording sound
collage from the same festival based on partly the same audio material.

Excellent stuff from my friend Vittore Baroni!
Can you help me in finding
more old releases from fabulous "Big City Orchestra"? (in particular the old K7s)
Thank you for your marvellous work of sharing. For me on my top 3 blogs (with "the thing on the doorstep" and "nostalgie de la boue" - better than recent "mutant sounds"!).

hmm i even thought about starting an own blog but i guess i'm quite too lazy to keep this thing running... maybe if mr.433rpm agree i can provide a few of the tapes i have left here... two dozens of bco tapes, a few s.core tapes, hands to, unkommuniti and a few other cool tapes by the likes of german sheperds, enstruction,ultra live usa 86, v.a. l'enfer est intime vol.0, eric lunde, who's complete backcatalogue will be re-issued soon as far as i know... so maybe lunde's work should not appear on this blog as it would not really benefit the work of the label which want's to keep the stuff available...
btw. i can slightly remember that i read in an interview with bco 10 or more years back, that they would like to re-release the whole bilk of bco tapes in a box... something like the merzbox but it would be of course much more... i guess the main problem would be that no-one even themselfs really know all the tapes which they released... rumours say that it could be nearly 1-2000 ;o) to speak with bco's "words" when we wake up we had signed 50 tape releasing contracts...
okay all so far... now i have a question mr433rpm... do you have the spinal machine or total disease tapes from watermann's nightshift label? if so it would be great to see them here soon...

your own blog sounds a good idea too. i don't have those watermann tapes

sad indeed... regarding an own blog by myself... not really a good idea....i guess i'm too lazy... who want's to wait a year for two or three posts...
next on my wishlist would be some tapes by das synthetische mischgewebe, non toxique lost and small cruel party... anyone of them there?