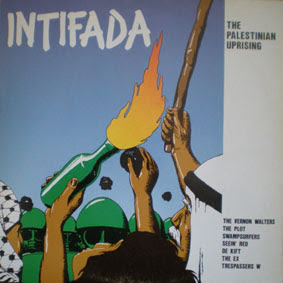 I think before I expressed my non-interest in politics, as I just never ever believe anybody who is politically inspired and especially when it comes to making promises: 'I can change the world' - or rather, in 21st century newspeak: 'nobody can change the world on his own, but together we can' (once it turns out to be another lying through his teeth politician, don't come complaining here, thank you), but of course punk is sometimes a lot about politics, and struggle for or against something. In the McDoomey LTD collection there is this album to support the Intifada, which is the first struggle of the Palestinian's against Israel. Another compilation that comes with an uberextensive booklet, which I didn't scan. The music is by The Vernon Walters, The Plot, Swampsurfers, Seein' Red, De Kift, The Ex, Trespassers W