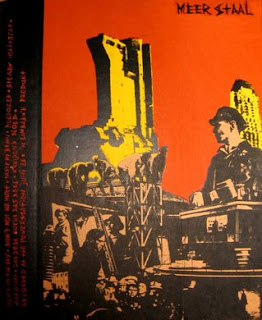 As promised. I have the tape but lost the big card board that is the cover of it, but finally someone send me a photograph of it. This band played music on playing metal, but not like Test Dept or Einsturzende Neubauten. More celebral and quiet I think, which makes it quite nice. Meer Staal after this released a LP + 7" called 'Hartslagen' in 1987 and a CD 'Ad Libitum' in 1996, both of which are still available from:

Floor van Riswick
D'n Herk 84
5803 DN
Venray
Tel: 0478-786418
No e-mail address, but grab a stamp and order them through mail. Or maybe through the website, which documents the whole punk/squat scene from Venlo. This site includes many covers from Limbabwe as well as a lot on the squat scene of Venlo. No link to our various posts on the music though.

a video from meer staal here