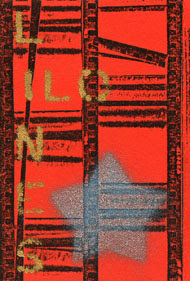 One of the many names used by the same guy who brought us earlier O.R.D.U.C. He has a great sense of naivity breathing from much of his other work, but this tape, released on his own New Bulwark label shows he can do some great ambient music, with a guitar and two tape-decks. Not unlike Frippertronics, at least that's what I imagine when I hear this. Unindexed

The big box of tapes have arrived - it has some true gemms, some which I totally forgot about and some which can be chucked in the bin right away. So I'll start sorting this out soon.

Nico Selen wrote: Not officially released by New Bulwark Records, but in fact the last release as such, before splitting up into Stichting Muziek Nieuws and Sun Sound Systems. Three pieces are on this tape:
A1. "Faces" 31:10
B2. "Lines" 22:01
B3. "Dates" 7:36
'Dates' was used by De Fabriek for their 'Attentie' release.

just what what you din*t understand from this
REPORT BROKEN LINKS THROUGH E-MAIL, NOT AS COMMENT.
maybe, if you are lucky i will reup this when i am back later this week

eh, yeah, didn't see that, sorry. and thanks

I know quite some work from projects related to Ilo Istatov, but wasn't aware of this production.

Happy about this gem.