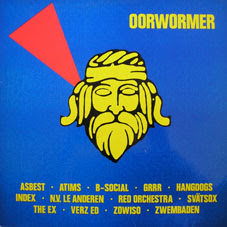 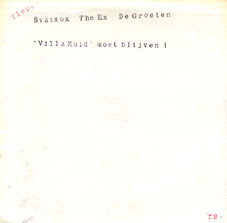 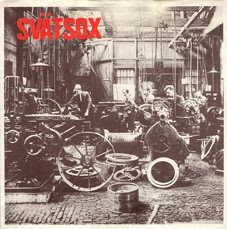 I'll never be a proper punk rocker, too systematic I guess. For the sixth post we point our browser to Wormer, a small village in the north western part of The Netherlands, which surely had the most active punk scene, certainly when seeing the size of the village. The Ex lived there for a while, so their style of playing was often copied by the other bands. This resulted in 'Oorwormer', with no less than thirteen bands, including Wormer's own version of Bob Dylan, Verz Ed. Included in this post is also the three group flexi disc 'Villa Zuid Moet Blijven', with The Ex, De Groeten and Svatsox, to raise interest in their squat Villa Zuid. Also to fill up things, the very first 7" by Svatsox - in a seperate post I will post their two albums soon.

All I can say is thank you for all the great Dutch Punk singles from the past week. I love the Ex and anything else in that realm of sound. Can't wait to listen to these gems.

nothing by the ex will be posted, as almost everything is in print by them... get it proper on cd i'd say.

been downloading almost all the dutch punk entries in one day and couldn't stop listening to them :)

also i am in love with the weirder and synth electro entries. great as well!

gosh, but now "victim" song by index can't go away from my brain....

all the best,
edu

excellent blog! thanks so much

Thank you very much for sharing