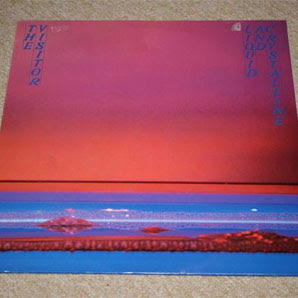 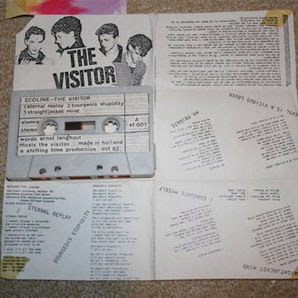 At last, another record, for those who dispared that I wouldn't be doing any records anymore. Following their 'Eye Of Madness' 7"posted here ages ago, here are the follow-up releases to that 7", their self-released cassette 'Ecoline', which sold some 1400 copies in it's days and the mini-album Liquid & Crystalline. The Vistor came from Friesland out of a folk band, this all highly inspired by Joy Division and The Cure this music, but still stands in time. This post was donated by an anonymous source, who also took these picures. Some of their later records are apparentely still available from Top Hole, at least looking at their website: top hole, so these I won't post. Still, the golden rule: buy records and support independents

You have a nice music blog, thank you!
Do you have SCATTERBRAINS (Utrecht)
MUSICAL MARRIAGE LP?

sadly no, even never heard of it...

great band! thanks for sharing.

I didnt think I new The Visitor, but as soon as I heard the first song, Eternal Replay, I recognized it, but now Im baffled because I dont recall the other songs at all.

Are they on a compilation with this song, do you know?

I wonder if I once owned it and got rid of it, because I know this, oh how frustrating!

I am not sure, i believe they were on 'shaken not stirred', but according to discogs it isn't. they list another comp also with another track. so i'm afraid i can't help you.

I have one track, "Silly Earth", from the Scatterbrains' album. Really nice minimal synth stuff with spoken words! If f67 is still interested, tell me by leaving another comment here.