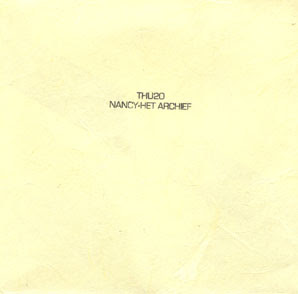 I know I said something about putting on tapes for a while, and technically this was a tape release, on GROSS in Japan, but I ripped this off the CDR release that Alluvial did later on and which is now sold out. THU20 exist since 1986 as the ongoing project, if only very sparsely, of Jos Smolders, Jacques van Bussel, Roel Meelkop and Peter Duimelinks (Guido Doesburg left a long time ago). They are a musique concrete group, using tape recorders in the past and no doubt computers these days. Their CD 'Eerste Schijf' was one of the first CDs I ever bought and still remains a classic. In the 90s and the new millenium this band is less active, certainly when it comes to releasing stuff. The reason for putting this up, is that a very rare concert by them will be held next wednesday in paradox in Tilburg. What the website doesn't tell you, that THU20 will have a fifth member that evening: Frans de Waard of Kapotte Muziek on acoustic objects. He played with THU20 before in Rotterdam (1987) and Bordeaux (1989) and wrote several liner notes for their releases (this one and 'Elfde Uni'). A special event, not to be missed.
This release has the full recording of their concert in Nancy as the first track, and all the other tracks are from their archives and do not have names. One of them is part of their live recording from the Earshot festival in 1990. These live cuts from the late 80s do not represent the current sound of THU20, which will be more subtle, so I am told.
This the 100th post!

Kevin from Alluvial here. Nice to see this posted! I did about 150 copies of this and I believe the tape version was less than 100. I think this is one of the best releases from THU20, including many of the regular CD editions. Enjoy!

according to the liner notes that come with this one, the GROSS version was 222 copies even. there are no more than 5 cds anyway, I think.

Ah yes, you are correct. I must have been thinking of a different GROSS release. You know, I agree with your assessment of Eerste Schijf. One day, I was browsing through a used CD bin in Chicago for nothing in particular, and found a copy of this for $1.50 (!) and I still think it is the best THU20 release of them all (it has nothing to do with the price though- a lucky break!). Keep up the good work with the blog. There are tons of great releases here- thank you!

Congradulations on your 100th posting, i'm certainly looking forward to your 500th. many thanks!