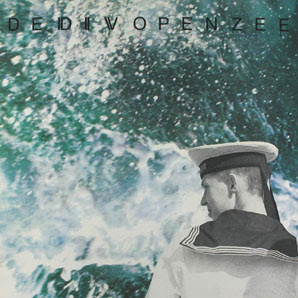 De Div came from Delft, The Netherlands and had quite a solid live reputation, although I never saw them play live. In the early days, they sang in dutch. De Div consisted of Art Zaaijer (sax, vocals) Marc de Reus (bass), Michel Schoots (drums), Niek van Slobbe http://www.blogger.com/img/gl.link.gif(guitar, synth). Started in 1979, released 'Stap Voor Stap' in 1981. Their sound is funky, not unlike Gang Of Four. They then released 'Europa Is Hier' (LP), 'Pasodoble' (cassette, will follow soon). This 'Open Zee' was produced by Jean Marie Aerts of TC Matic. The band will later on sing in english and stop in 1990.

Thanks for this post. Unfortunately two times "Splits het atoom" and no "Als lemmingen".

i see, well, sorry. i ripped this from a CDR that someone gave me years ago. i don't have the original record, so i am afraid it's not something i can correct. i think the second one is the real 'splits het atoom'. if somebody has the original 'als lemmingen' please let me know (433rpm@gmail.com)

Can't wait for the other Div stuff, so far this is all I know.

I have "Europa Is Hier" and always loved the way the singing/lyrics were not so mixed on top of the music like all other dutch music was done. It'd great to hear their other records now aswell!!

Any chance for more posts on de Div? Open Zee deserves a better rip and what about the other albums? I could share some...

If someone still needs 'als lemmingen', I've uploaded it to http://www.megaupload.com/?d=V09PPQ8R
Would you like 'Europa is Hier' and 'Sex Sex Sex' too?

gerco, what's wrong with the rip? all my files are in the size, and you'r ethe first one to complain.

and bev: als lemmingen is part of the new zip pasodoble zip. yes, i'd love any others you can share. 433rpm@gmail.com

sorry, no complains, i like to play it loud and then some songs don't reach the end. they have been cut in the fade out. but the sound quality is very good!!
i have got twist and turn and in front. can't make any rips tough..

@ Anonymous: many, many thanks for giving us "In Front"! Any chance of getting the rest of "Shaken Not Stirred" up as well? According to Discogs.com, some of the tracks are exclusive versions...