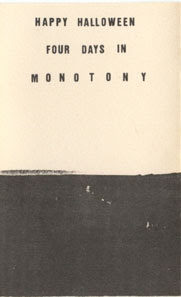 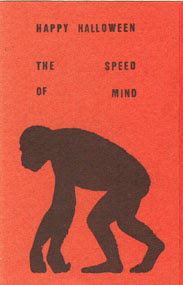 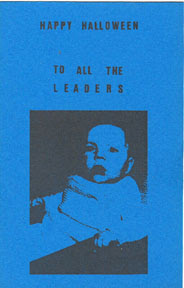 Maybe you never heard of Roel Meelkop, but he's a composer of modern music, which he performs on his laptop. He's also a member of Zebra, Goem and Kapotte Muziek with Frans de Waard and Peter Duimelinks and a member of THU20. A serious old man but with a long history in music. Before THU20 he was a member of Club Rialto, a bass, vocals, rhythm box (with various future members of THU20) band and Meelkop had his solo project called Happy Halloween (before using the monikker Mailcop and releasing two excellent tapes on Midas Music). As Happy Halloween he played his own brand of popmusic, experimental and industrial music using guitar, rhythmbox and a bit of electronics, but which sounds remarkably fresh in these days. He released three tapes on his own Turntable Tapes, recorded at home using the ping-pong method (record on two tapes and mix those to a third, using that as the next layer etc.), so there is a fair amount of hiss involved. The reason for putting up this post today is that Roel Meelkop plays a solo concert at Cuba in Munster, Germany tomorrow, together with Marc Behrens (whose very early works I no longer have). Meelkop's latest CD '5(Zwischenfalle)' willl be released on Auf Abwegen anywhere soon, and the concert is a sort of presentation. More info:
http://www.muenster.org/cuba/haus/blackbox/programm.html

hi, just checked out this posts... absolutely great and cool sounds...
any chance to post any other early midas tapes or club rialto stuff?
would love to hear more