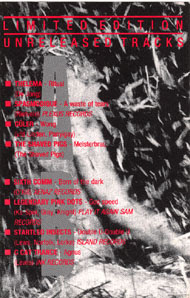 In the 80s there was one big music magazine in the Netherlands, Muziekkrant Oor, who hardly wrote about experimental music. Vinyl, the one with flexi's, did, so it was a bit unclear why we needed Provoke. Three issues were made, with a cassette and that I think was the downside: nobody wanted a tape, even if it had 'well-known names'. The magazine disappeared after three issues. I have the tapes that came with the May 1988 and the October 1988 issue, I'll post soon the other one. This one has exclusive tracks by Thelema, Spasmodique, Guler, The Shaved Pigs, Sixth Comm, Legendary Pink Dots, Startled Insects and C Cat Trance. If anyone has the third tape, which had Muslimgauze, among others, please let me know (433rpm@gmail.com)

Excellent blog! I ask you if you have any tape of the Latvian/Russians noisemakers ZGA, or of its frontman, Nick Soudnik.
Congratulations! Thanks

No, I don't. sorry. that was never my kind of music.

Do you have the tape with the Mute Drivers song on it?
I am interested in the tape (with mag if possible.
Please contact me at Fred@mutedriver.nl