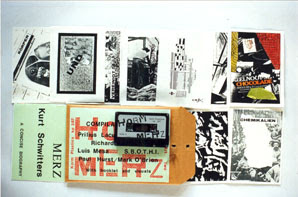 Dada has been an inspiration for many musicians (Cabaret Voltaire for instance) and also the collage work of Kurt Schwitters inspired bands, of which Merzbow is still the prime example. In 1987 it was the 100th anniversary of Schwitters and the Dutch label Korm Plastics released this tape, with various bands with some Schwitters connection: SBOTHI, Merzbow, Luis Mesa, Prilius Lacus, Richard Franecki (of F/i) and Paul Hurst/Mark O'Brien (of Produktion). It was the second thematic compilation for this label (the other will follow one day) and taken from the CDR re-issue that Korm did when it was part of Staalplaat. I don't think it's available in either form (cassette and CDR), so safe to put it here. Quite a nice compilation of collage music, not at all the heavy industrial type of stuff you'd expect from this label. Haven't got any proper scans of the package though.

I'll second anasarca's gratitude! The massmirror link was DOA - thank you for the RapidShare link!