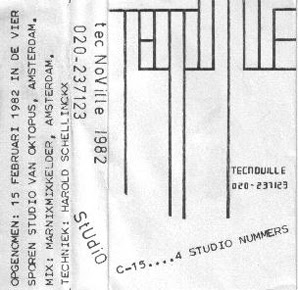 The follow-up to Tox Modell was the short lived Tecnoville, a four piece with Andre Bach and Marc Tegefoss on guitars and two guys named Herman on bass and drums. No last names for them, in true punk spirit. They were before this member of The Workmates. Tecnoville recorded this demo tape, which was officially released, and 'Input Out' made it to a flexi disc for Vinyl, which is hardly a surprise as Tox Modell helped starting it. Then they make a 12", 'Glow', which I don't have, on Vinyl Records, before calling it a day. Andre and Marc already started Det Wiehl during all of this, but after the split of Tecnoville it will be become their main project. This mp3 was donated by DMDN (whose band Lewd will play in Tilburg this coming saturday at SXSW. It's their first concert in 10 or so years).