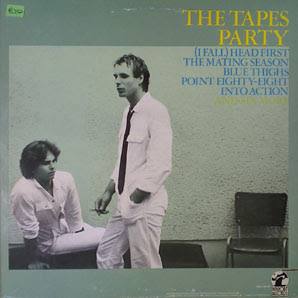 A long long time ago I bought a great 7", 'Blue Thighs/Call Me' by Amsterdam new wave group The Tapes. It was a cut-out and played it to death. The Tapes were called The Netherland's answer to Talking Heads. The band was Dennis Duchhart (Keyboards), Igor Roovers (bass), Michiel Brandes (guitar), Peter Meuris (drums), Rolf Hermsen (guitar, vocals). They started in 1977 and a year later Plurex releases their first LP, 'You Just Can't Sleep', which is well-received (and which can be found on some blog, but I forgot which one). Originally 'Party' was to be released by Plurex, but ultimately it is released by Wea/Passport. The story will continue as soon as we get to their final record. That one, and this one, plus the posts of tomorrow and saturday were donated by a fan of this blog, who wishes to remain anynomous.

Oh boy, oh boy, oh boy! I have this one but cannot wait for "On A Clear Day"! Will that be tomorrow or Saturday?

As far as I know, there is nothing else out there besides the 3 albums. All the singles/b-sides were albumtracks?

no alas not. soon... i am looking forward myself. blue tights is the same on 7" as LP, call me might be a bit different than on the first LP. the other 7" i don't have...

one of the best guitar bands of the era including television, king crimson and other... i still have the LP of this...would love to find the remainder of their offerings...thanks so much!

I have a copy of Party. have never listened to Clear Day and would love to. Saw the band live back in the day.

I found this album in a huge pile that i bought from a salvation army. I liked/loved it so much that I searched out another one just to have a backup. Amazing band. way ahead of their time

Hi, I have 'On a clear day' and would love to share. It's a very different album, though. Songwriting is at the same great level, but musically it's a much more synth-oriented record. The overall atmosphere is very uplifting, the energy is high, and the playing excellent. I think it has stood the test of time well.

If someone can tell me how to post the music, I'd gladly do so.

Thanks a million for uploading! Party is my favourite of their three albums... Thanks again