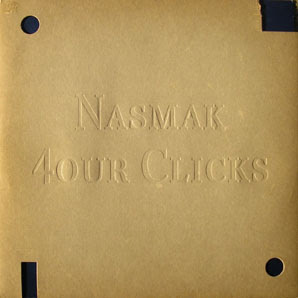 I think it was Phoenix Harpins who suggested to do some posting on Nasmak, once the hottest and most avant-garde band in The Netherlands, but who seem to be largely ignored on the blogs. Nasmak, a four piece band from Eindhoven, were always moving to new structures and new sounds, but certainly on their records stayed in a rock format, later spiced with some dance music influences. Their tapes show their development as a band. '4Our Clicks' is their second LP, and probably much acclaimed one. I will post 'Silhouette' soon, and probably also 'Duel', but I seem to be missing a track or two (don't have the album myself). Anyone who has the first LP and/or any of the six cassettes they released, please contact me (433rpm@gmail.com).

thanks to your blog i've been introduced to a number of intriguing bands from the netherlands. i've liked almost everything i've downloaded here, nasmak is yet another. thanks.

I had this album too (don't know if I still do), and guess what, the same corner got ripped off the cover of mine, haha!

ive this album and i can rip it :)

I saw once a french cd version of this album, with explanations on inlay about the mixdown which was known to be incomplete due to the lost of half of the tapes. These tapes were apparently recovered later and a new release (on CD) was done. I could listen to some on the new tracks, but I was already addict to the previous mix and decided to keep the vinyl..

are you sure it's a french CD? it was released in the netherlands by eksakt on CD, but they immediately went out of business so it was hardly for sale. somewhere there should be a whole pressing of this in someone's basement...

I mean it was in a french reseller shop (where I live), maybe the cd came from eksakt. What I remember is the tracks were completely different, with additional instruments supposed to be lost on the first vinyl release.