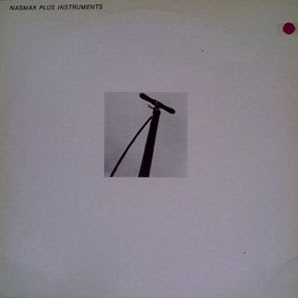 One of those albums I sadly missed when it came out, although I had other stuff by Nasmak in those days, like the earlier posted '4Our Clicks'. Nasmak started as Nasmaak, a band with lots of dressing up, and with a leading role for Truus de Groot. But sheer experimentation took over when they release Nasmak Plus Instruments, their first LP. The a-side shows them in conventional line up, whereas the b-side is more about Truus and her crackle box. She will soon leave the group to work with Plus Instruments (their two albums can be found on other blogs). I just got a solo tape from her, which I'll post next week. This LP was John Peel's favorite continental record back then, and Nasmak was the first Dutch band to do a Peel Session.

Thank you very much for this.

Thanks Sir TakeOff for pointing me here and THANKS for having posting Nasmak +
And thanks to Jack Ison for first buying the LP and playing it for me WAY back when. Finally I can retire my very crappy cassette version now.
Musically Nasmak has been like a mother's breast to me.

thanks so much for this