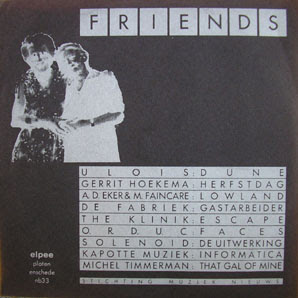 And the final compilation by Stichting Muziek Nieuws, which is musically the one that comes closest to the Contact Disc releases, a curious combination of interesting electronic/industrial bands, such as Gerrit Hoekema, Das Ding, The Klinik, Solenoid, De Fabriek and Kapotte Muziek and odd balls like The Bearcage and Michel Timmerman. The cover shown here is actually a limited edition of I can't remember how many. The 'real' cover is blue and red, the 'limited' is a negative print thereof.

Nico Selen wrote: This was the first compilation Stichting Muziek Nieuws released along the principle of '17 to 7 on 33'. The whole edition was 550 copies, of which 50 have the 'negative cover'. The red side was for popmusic, and the blue side for experimental music, but it was a bit unbalance, so Michel Timmerman ended up on the blue side. In hindsight it would have been better to swop him with Das Ding/L.Y.I. The album was sponsored by 'Elpee', a record shop from Enschede which no longer exists

I have a blog which is completely full of entertainment like movies, music, ringtones etc.