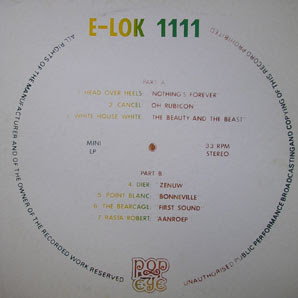 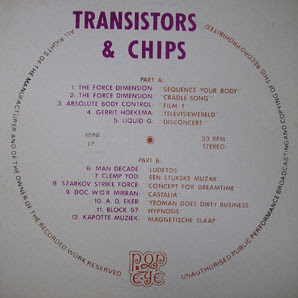 Inspired by Plurex and Contactdisc, Stichting Muziek Nieuws (the follow up to New Bulwark who released the ORDUC LP posted before), started to release a few of those pay along albums, of which 'Motop' (number 1 on LP and 2 on CD, the latter can be found on Mutant Sounds), of which this one is the last. It's a bit of cryptic affair this one, as the label announces them as two 'mini-lps', but in reality it is just a split LP. One side is called 'E-Lok 1111', which has sort of standard popmusic, with bands Heads Over Heels, Cancel, White House White, Dier, Point Blanc, The Bearcage and Rasta Robert and the other side is called 'Transistor & Chips' with electronic music by bands as The Force Dimension, Absolute Body Control, Gerrit Hoekema, Liquid G, Man Decade, Clemp Yod, Szarkov Strike Force, Doc Wor Mirran, A.D. Eker, Block 57 and Kapotte Muziek. The mentioning of 'Pop Eye' on the cover is from a local (Enschede) record store who sponsored this LP (not the others). 'Motop 1' and 'Friends' I will post later on, as well as the only LP this label released by one band, Kapotte Muziek's 'History Is What Was', but I am more busy than in the summer time, so I can't really do more than one LP per day.

Nico Selen wrote: This was the second compilation Stichting Muziek Nieuws released along the principle of '17 to 7 on 33'. Originally intended to be two seperate albums, but RTC pulled back a long track, so they became one album. The album was sponsored by 'Pop Eye', a record shop from Hengelo which still exists