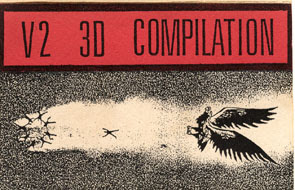 The V2 Archief label released various compilations, both on cassette and CD, to document their various live activities. These were usually based along a theme or some such, but I lost the booklet that goes with this release, so I am clueless what this 'manifestation' (as was a popular phrase of the V2 people back then) was all about. It has a piece by Laibach that is also on the previously posted V2 release, and also included are Wikke 't Hooft, Ret Marut, Ad van Iersel, Demorgorgon (with Lukas Simonis), 6de Kolonne (of the Kaisettes label), Ad van Buuren (of whom I will post a great tape soon), Cas de Marez and Strafe Fur Rebellion. V2 moved to Rotterdam from 's-Hertogenbosch (I must use the correct name of the city, since you won't find Den Bosch on a map, but that's how we dutch call the city) in 1992 or 3. They just released a heavy book (in every sense of the word) on the work of Dick Raaymakers.

I just noticed this is the third time you posted something by (well-known musician/actor) Pierre van Duijl; first the King Kong comp (Terminal City), then Rotterdam Collection, and now Ret Marut! Funny to think this is the same guy me and my kids have watched singing "Stroei Voei" about a hundred times (on the video of the Ja Zuster Nee Zuster movie). Another funny detail is that there's still a Rondos connection, as the trombone player in his current band Dopegezinde Gemeente, Patrick, is also in De Kift (with ex-Rondo Wim).

well known? humm, i'm not with youi must admit, but i have more red marut - in the future

This also feels like a trip down memory lane. V2 was based in an old factory that was a collective of artists who organised exhibitions, gigs, events etc. The compilation is a recap of a series of concerts during an exhibition of the same artists. I was in Ret Marut and we also had a corner of the massive space for a video installation. We played every weekend at V2, in a mixed line-up including Laibach (=scary bunch). Happy days! Matz

i don't think pierre van duyl ever played in ret marut, well maybe with a session or with the BIG band they sometimes had that only played in the jazzbunker.