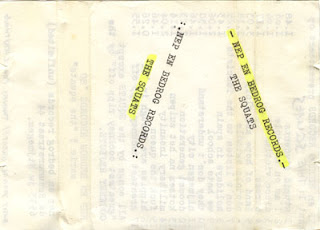 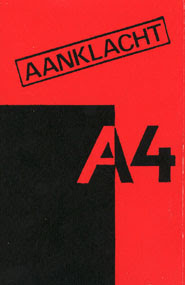 The book 'Het Gejuich Was Massaal' says in their discography that they don't list cassette releases with punk music, which of course is a great pity, for completist suckers like myself. In those days I didn't get that many cassettes with punk, I'm sure you can tell if you look at the more experimental music of the last few weeks, but I do have a few. A4 are band from Amsterdam, and besides their tracks on 'Als Je Haar' from last week, this is the only other release. The other band are The Squats of whom I posted a 7" some time ago. I told you I was in the same class as the drummer, and the singer was also in the same school - let's say he wasn't the nicest guy around. The Squats released some more tapes on their own 'Nep & Bedrog' records (which I no longer have), before splitting up. Bock, the drummer, later started The Magnificent, who released even some records in the UK. A different story altogether, which I would leave for some other blog. I think it came in a bigger enveloppe of sorts, but I no longer have it. Two punk bands from The Netherlands, and two quite different ones at that.