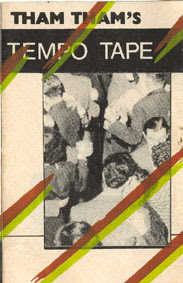 Tham Tham was somehow closely related to the early Ding Dong Records and Tapes and had many plans when they started out, including Cassette Gazette, a magazine on cassette (and a Andre de Saint-Obin song of the same name). I never saw those, so I doubt if they were released. The only two items released, were 'Hystery' by Monomen (which will come later) and this compilation tape of Arnhem's finest electronic musicians, in various combinations, some of them being a fine off. None of the names mean much, except More Tobs (connected to Remo Tobs) and Saint-Obin, but behind Ding Dong Twins are of course Van Kaye & Ignit, and Trollertanz are two members of Mekanik Kommando. Also included are Adinda & Robert, Tis Bam, Ungeheuer am Steuer, Wevri's, The Nonomen, Jan van Wijk and Maph. Great electro popmusic.