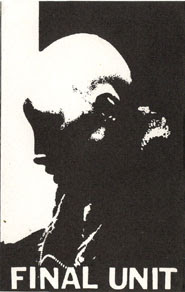 Two tape releases of a highly obscure nature. According to the cassette catalogus there is another release on this label, which I don't have. Final Unit was real band with Aad (vocals, percussion), Henri (drums, syn. drums), Jan (bass), Guido (guitar, syn drums) and Rob (synth, vocals, rhythm box). It lists phone numbers in The Hague, but it was recorded at Nieuw Nyevelt in Wassenaar, the same place as used by Ensemble Pittoresque. The b-side is a live recordings which I couldn't properly index. Besides the titles, it says 'recorded in the living room' for the Ego Produkties release, but I wouldn't be surprised if this was some kind of off-shoot from Final Unit. Both of them are pretty decent releases of rock combining with electronics, though not really synth punk.

Allright, you're the best and Oorwormer does the rest!
Thanks!
Phil.

Way cool to see this stuff online. I recorded the Egoproductions in the living room. Final Unit was my band as you presume. In fact it was the first band I played with. The ego production tape were songs that didn't made it to get played by Final Unit.
After Final Unit I plaed with Ensemble Pittoresque, Bad Bob, Whore and the Beautifull people. And also still active with my 'Ego productions' althought it's called 'Zebra404' these days. You can find the music at http://zebra404.imeem.com and a lot of other music I made for my live internet performances for DFM RTV . It's available as podcast at http://zebcast.blogspot.com