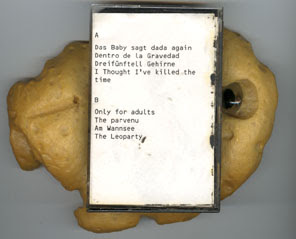 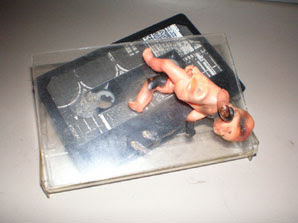 This might be one of the most obscure names thus far on this blog. A four piece band from Den Bosch, The Netherlands. They had ties to V2 when they were located in that town. Prilius Lacus rehearsed there and made recordings in the studio that was owned by Mission Papua Holland, housed in the garage next to V2. They had a conventional line up, drums, bass, guitar, vocals and saxophone, but also used lots of metal percussion, tape machines an vacuum cleaners. Their first cassette, 'Symbol Und Hoffnung' is quite raw, NDW like, but more Todliche Doris and Neubauten like. It's not great, but their second release 'Dentro De La Gravidad' has a well-balanced sound, combining the rock elements with studio trickery, sound collages and such like. It makes them sound more like Nurse With Wound and I am quite surprised of the quality after all these years. Their third and final release is 'Pas De Fear' a ten minute tape release by Korm Plastics. This came in a plastic bag, with just the tape (no shell), and some extra inserts. The other two releases are packed horrible, in my humble opinion. Burned baby dolls glued to the first and hidious purfoam on the second. We should forget those package, and enjoy, especially 'Dentro'.