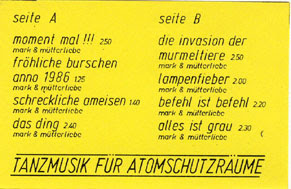 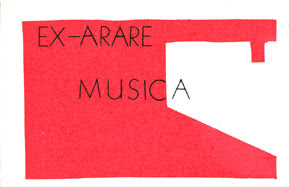 Two short releases today, although you could doubt wether the release by Unheimliche Jungfrauen is really released, but I bought in Staalplaat back in the day, so let's say it's properly released, but without a label. They are three piece from Utrecht with D. Mark on guitar, K.H. Mütterliebe on vocals and casio and H. Bavinck on bass and production. They love everything German, and their tape is a great example of how easy you could copy NDW to your own end. This should be released on LP straight away (maybe I should do it, after attempts failed with Svatsox and Rondos, although the latter will release a CD in 2008).
No information on Ex-Arare Musica, but it's also nice synth stuff, a bit more experimental than the other. The release is on Combinator Records, a label from Rotterdam and according to 'Cassette Catalogus' there is also a Störung cassette on that label: wish I had that!

i enjoyed this post. Too bad there's not that much info on these two.

yeah, both are great. lost classics

Can you upload EX-ARARE MUSICA again?
Seems that the link doesn´t work....

Thank you so much in advance!
You don´t believe how long i searched for this!