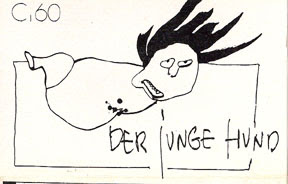 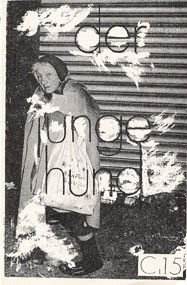 A long time ago, I posted the two pieces of vinyl released by Der Junge Hund, now it's time for a double tape by them. 'Europa's Ladenversuch' is a sixty minute tape of recordings made in Berlin, Zaandam, Eindhoven, Groningen, Apeldoorn, Heemstede and Amsterdam. The band grew to a four piece in this period: Renz Zanders on voice and guitar, Horst Rickels (sax), Rik van Iersel (drums) and Ole vd Beuken on guitar. The other tape was a fifteen minute studio tape. The live tape isn't the best in quality. Two more live tapes were released, which will be posted soon, and they show much better the raw dynamic of this free jazz punk combo.