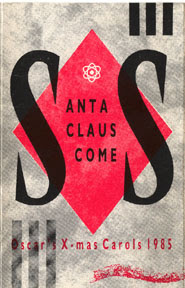 Obviously I can't escape Christmas, even though I would love to. Oscar, mentioned in the title, is Oscar Smit, for a long period the most important man in my life, since he reviewed cassettes among other things in Vinyl, the best magazine on music ever produced in The Netherlands. Due to all his contacts he compiled two or three times a compilation with alternative Christmas music. I don't have the first one, but this is the second one, with Christmas tunes by Otto Grunbauer, Bene Gesserit, Jacques van Erven, Panta Rhei, Doxa Sinistra, DDAA, History Of Unheard Music, V.ø, Genetic Factor, Mark Lane, Bump and four soundpieces by Oscar himself as Grandmaster O.