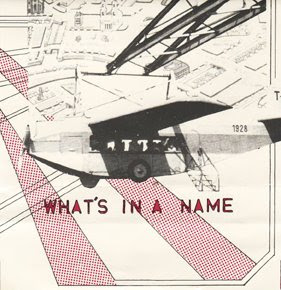 Another Ding Dong Tape is a bit unclear as for the credits. De Nederlandse Cassette Catalogus says for artist What's In A Name and for title '70 Great Ideas From Europe' or 'seventeen great ideas' as is also said on the insert. But Dr. Freakowitz, who gave me this, doesn't have the package, nor I, which once again proofs I rather use something we have complete, but hey, its a pretty rare Ding Dong release and the music is alright: synth pop by two people (Alex van Hoorn on synthesizer, guitar, lyrics, vocals and Jos de Rooy on guitar, bass guitar, synthesizer), with even a bit of hit potentional, but their songs tend to be a bit too complex, I guess. Divided in a side with five songs (the 'seventeen great ideas') and in a side of 'collection of songs sounds and atmosphere's' the 'Music For Factory's' side.