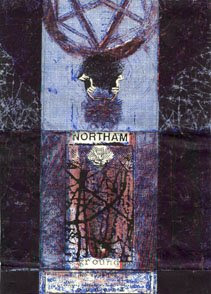 From discogs: "Michael Northam's (a.k.a. mnortham) artistic trajectory has been a gradual process extending from early actionistic performances to current sound actions, field recordings and compositions. Northam explores the avenue of direct electroacoustic improvisation, solo and with a variety of collaborators. His many 'sound actions' have taken place at venues throughout Europe and North America. Since his first CD was released in 1993, he has consistently produced works that give an opportunity for the listeners to challenge and examine themselves-exploring ideas of place on "Stomach of the Sky", qualities of weather on "Coyot", and perceptions of microscopic worlds on "From Within the Solar Cave". Similar such ideas have formed the basis of his installations such as "Entering Molecular Streams' (Observatori festival, Valencia, Spain 2000) and "Circulating Phases" (Klangturm, St. Pölten, Austria 2001)."

From the insert, "Done with more or less basic equipment out of economic necessity; completed from recordings made and remixed while traveling between 1991 and presently, 5-1992."

What an amazing cover art!
THX!

Great, thank you very much!

check out what's happened in the mean time: