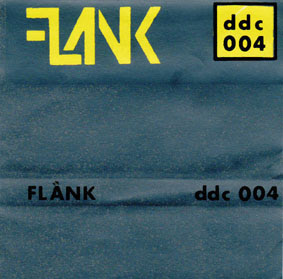 Although boredom never occurs here very much, I got tempted by all three comments from last saturday's post about starting a blog with just fanzines, I did some work and here it is: Notes From Underground. Like it says there, don't expect it to have a post everyday. I do have to work occasionally. Anyway, thanks to Dr. Freakowitz, here is a short tape on Ding Dong Records & Tapes and one you wouldn't expect if you know some of the other releases they had. They are mostly electronic, but Flank was a rock band, drums, guitar, bass, saxophone (I believe) and vocals. The lyircs are typical left-wing political ones from the early 80s and sound rather naive, but the music is quite strong. A bit like Gang Of Four says Freakowitz.

Thank you and Dr Feakowitz as well!