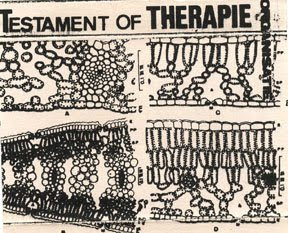 I borrowed this from someone who played at the very night this was recorded. He wrote about it: "This was a terrible night. A cold garage like space, no audience showing up. Part of a cassette label event, where people could listen, trade and buy. We were supposed to get 40 guilders for the car hire (roughly 20 euro now - 433rpm) but since not many people showed up, the guy from the Therapie label gave us some cassettes, which we then sold to V2, who trashed them years later when they moved. This tape release was quite possible a bootleg, since the Therapie label had stopped by then, and gave this, without us knowning to some label called B.Z.N. Productions. I must admit I don't know where I got my copy". All concerts are present here from that night: Experiment Incest, Lakoste, Death Pact International, A Violated Body and Vidna Obmana. All live in Antwerpen.