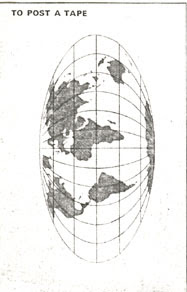 The label from the French band No Unauthorized produced these tapes which weren't for sale, but only available to those contributed, and it had sixty tracks of one minute. So they were released in an edition of 61 copies. I tried to seperate the tracks, but I failed. Some names on this: The Haters, Bene Gesserit, Onnyk, Mark Lane, Le Syndicat, Architects Office, Kapotte Muziek, Widemouth Tapes, Urbain Autopsy, Mario Marzidovsek and many more.

According has commented to me Rafael Flores (Comando Bruno)-The orchestal commandant Bruno... in this compilation- , this cassette arrived at the hands of his collaborators totally disassembled...A nice "Kinder" toy. :)
Thank for the post.