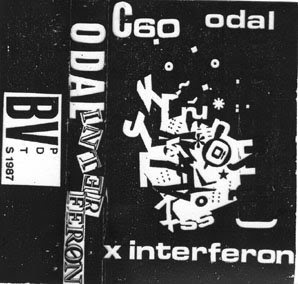 Another Odal tape. Polish label Impulsy Stetoskopu, who released XX Commitee before when we posted it, just send me this message:


I would like to inform about a new IMPULSY STETOSKOPU release:
013 ODAL "Smashing Up Reality / This Damned Nihilism" 2 x CD-R. Limited edition of 120 copies in a painted cake box with a tomentum.
Never released material from 1987-1989 years.
Design and artwork by Glaukos and Sylwia Kochan. Digital mastering was done by Glaukos at Impulsy Stetoskopu Studio.
“These recordings were made in ‘87 and ‘88 orginally for Vis A Vis the label of Gerogerigegege in Japan, but for some reason it never released on vinyl. 15 years later I received the orginally masters back, but there were rumours that RRRecords had some copies for sale, but that has never confirmed. However I always thought that there’s an curse on this project and it is!
Thanks to Rafal that he gives some of these Odalsounds an place”. /Peter ZINCKEN/

Not the same as this one, but you may be introduced into the world of Odal, if needed at all and then get this double CDR.

i can vouch for the odal 2x cd release, as there seems to have been an edition by peter himself which i got from him in about '91 with similar covers on transparent paper looking like legit vis-a-vis releases. they're both some of my fave odal material, coming right after holland blank on awb rec.
would have been cool on vinyl.