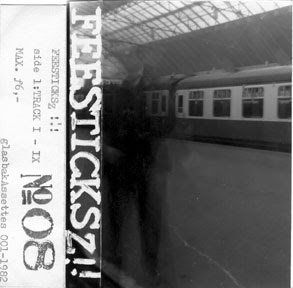 Maybe its by now a returning story, a broken record, but I really know nothing about the Feesticksz!!. Its one of those I bought at the time, for the listed six guilders (3 euros now), which seemed cheap. According to the 'Nederlandse Cassette Catalogus', there were two other releases on this label, which I never heard. It also says that that this tape is called 'First Musical Efforts', but it's not mentioned on the cover. The label was from the small village Koudekerke and the music is post punk experimental and electronic. Quite nice, still!

I like this music alot, but with alot of old recordings, the sound quality is not so good. But, always thank you very much for turning us on to all the music.

I think the sound quality is fine.