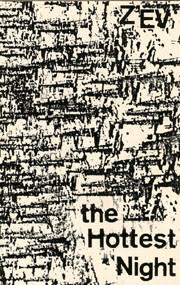 I was browsing the web and noticed a new CD release by mister Z'EV on Korm Plastics called 'Outwaard', and I was reminded that I have this great tape by him on Decay Int., the label that brought you The Love Choir before and more in the future. If I'm not wrong the Z'EV< release is one of the few foreign acts on that label. In his discography in 'One Foot In The Grave' Z'EV writes: "Hayo den Boeft came to see in 1986 and as I had always wanted to release at least the two Z'EV sets from 12 Feb 1981 'in context', he agreed to put them out, even though the first set had alreday appeared as Elemental Music. I also did a 'formal' visual piece which was included in the package, using a detail from a newspaper photo, mirrored and repeated". Classic Z'EV stuff that, no doubt that new CD will sound different (well, at least the description sounds so)

Do you have any Alan Licht solo guitar?