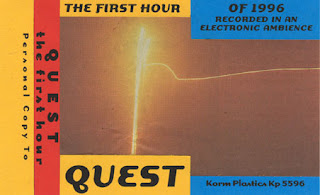 More fireworks, as promised on this cassette release from Quest. It was recorded in the very early hours or so of January 1st 1996. The complete title is supposed to be 'The First Hour Of 1996' - 'captured in an electronic ambience'. It was released as a cassette by Korm Plastics and later as a CDR by Bake Records. Quest is one of the many names used by Frans de Waard for his 'solo ambient music'. He also did a duo with Maurice van Dongen as QST, with kinda similar stuff. He no longer uses the name I think.