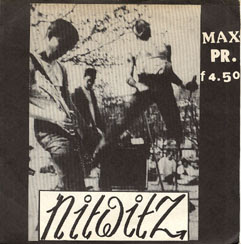 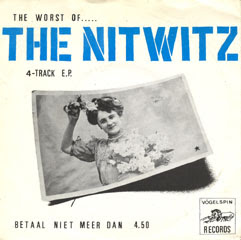 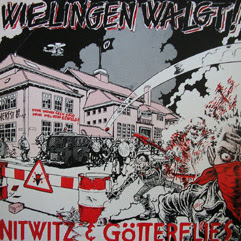 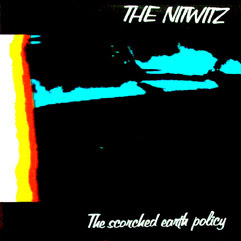 One of my very very dear Dutch punk 7"s is the very first 7" by The Nitwitz. I don't know how often I played this, but this serieous fun punk band from Amsterdam always puts a big smile on my face. They started at the end of 1978 and worked along side The Ex, Workmates, Gotterflies. Their records were released on their own Vögelspin Records. In 1982 singer Erik Peters left and they changed their name to Balthazar Gerards Kommando (BGK), named after the murderer of the first Willem the Silent in 1584 an arguable one of the very first hardcore punk band in The Netherlands. In 1996 the band was reformed and released more records (hence the title early works here), they fall outside the limits I impose on myself for this blog. The Wielingen Walgt 12" has The Nitwitz on one side and the less punky but nevertheless also great Götterflies on the other side.

yes, you are quite right. strange no-one noticed before. i re-uploaded now called thenitwitz.zip, so hopefully it sounds better!

Thanx for the songs but the record below is fucked up, i downloaded it twice withe same fold,

could you be more specific? you posted this comment with two different posts. please e-mail, not via comments