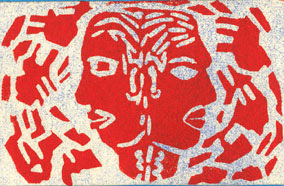 With this post I finish almost all V2 Archief tapes, one more to come which is the 'Dutch Tour' double cassette by Merzbow. Ad van Buuren hails from 's-Hertogenbosch and builts sound installations. In the early days doing so with reel-to-reel tape machines and objects producing sound, these days it's with relais peeping. Very nice mechanical music that has a great warmth to it. On 'Wervels En Flarden', his only release ever, there is the 'wervel side' (a-side) in which he works with tape manipulations of sounds and on the 'flarden-side' its something similar but only with voices. Great stuff. A great shame nothing was ever released from his tape-recorder installations.

I see a similar stew of music interest in your post from the netherlands. Where did this experimentive music come from? Who started it in that area of the world? What is the rave of music in the Netherlands these days? American music has become a bad rehash from everything over the last 15 years. Everyone has copied everyone else to death.That is why I have started searching blogs. I have went back to when music had some form of untapped creativity.Thnx for you archive you have shared. I hope the day you post 'A Blaze Colour', will certainly come soon.

things go back to the late fifties with dick raaymakers i guess. there are 2 quite well-known albums called 'anthology of dutch electronic tape music', which covers this kind of music from 1955 to 1977. i am not sure if that was an influence on the work of Ad though.
the rave of music these days? i wouldn't know really, as i'm not concerned at all with what is hip, but some of the people i published on this blog i still folllow, like Roel Meelkop, Jos Smolders, Frans de Waard and some of the younger people like Machinefabriek and Staplerfahrer. They experiment and deliver music worthwhile to hear. I very much agree with what you say about the US music - I don't understand the whole new noise thing - wolf eyes et al - which is a bad copy of bad music from 2 decades ago.
a blaze colour: soooooon

Iam not sure what is with bands like wolf eyes either.All of them ,as far as I see, are either trying to be post-post industrialist,'trendy', or their own person. I enjoyed your merzbow posts. No,no merzbow for me either. But, his older stuff was cool. Everything else I hear is re-hash or trash of some various groupings of genres. I enjoyed the Tham tham tape much too. I like the dutch electro-synth pop stuff. Iam sorry I have bugged you about the 'blaze colour'. I like them alot. Your quiry of them has been my only lead to hearing their music. I have only found one song outside your blog by them. They had some live tapes someone was selling on E-bay for upward 300$ recently. Do your post in the order you wish. Ill wait,sorry about that.Be good.Thnx