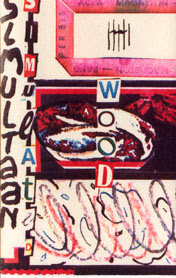 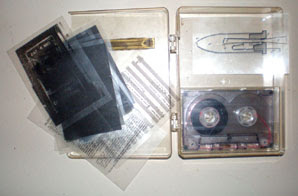 Two tapes dealing with Der Junge Hund member Horst Rickels. Simulated Wood was a group of him with Horst, Rik van Iersel (also of Der Junge Hund) and Joop van Brakel (of Nasmak) who played three simulatanous solo concerts in V2, who released aftewards a cassette. Highly concrete music of all sorts of acoustic objects rubbing and shaking. Perhaps a bit more interesting is the solo release by Horst. I culled this information from Discogs: "This tape was released in a plastic jewel box in wich a languet is mounted that was taken out of an old harmonium. Inside the box are some transparent inlays with picture, a music-score and text printed on it in black and white. The soundinstallation "De 12 Apostelen" originated in the project "Godenschemering II" that took place in the hall of the former factory V2 in 's Hertogenbosch, The Netherlands in collaboration with Elviera Wersche. Because of the affirmative character of "The Year of Music 1985" the projectweek of april 29th until may 4th 1985 was declared to "Day of Prayer for Croaking". This last is a comment on the drowsy celebrations on may 1st, but also to remember the 130st anniversary of the futurist composer Luigi Russolo. The project was concluded with a performance on may 4th during a total eclipse of the moon. One week later the recordings for this cassette were made. The performers were : E.Werners, J.P. Hochet, N.Pauli, S.Wubben, W.'tHooft, J.de Jong, A.Adriaansens."
All buyers of the cassette were invited to come five years later and bring their cassette and a new concert was played. I was there, but don't remember much of the evening, other than that it was funny to see all those boxes. Mine is broke by now, so a good friend of mine provided scans and photo's of it. The music is quite minimal and drone like, certainly for those who like Phill Niblock

The Horst Rickels is interesting, especially the B side's mysterious ambiant/industrial sounds. Thanks for this and the pictures you provided.
continuo