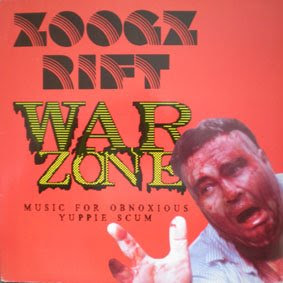 From discogs: "As imaginative and stimulating as he is irritating and vitriolic, California's Zoogz Rift (Robert Pawlikowski) is an iconoclastic original, a reactionary whose paranoia has too frequently detracted from his music's experimental pizzazz and considerable exotic charm. This might be explained by what were, for a long time, his primary intellectual inspirations: Salvador Dali's dadaist strategies and Ayn Rand's objective realism. The singer/guitarist is (too) often compared musically to Frank Zappa and Captain Beefheart; while this may have applied to his earlier recordings, the past few years have found Rift toiling prolifically in a fertile field all his own. And lest casual observers be intimidated by his scatology and other intentional offenses to good taste and community standards, let it be stated clearly that Rift is not some talentless asshole making noise for an audience of one. Although they are wildly uneven, many of his records are genuinely good."

thanks for this one... the guy is a real great (and damn' crazy) artist!

Wow, Zoogz Rift. Notable if for no other reason than the title of his live album, "Can You Smell My Genitals from Where You're Standing?".

I dare any artist to top that.