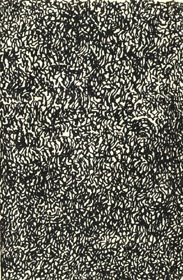 "This cassette is noxious forces blasted to wake you from the stench of the nineteen eighty-nine in shock waves of DNA communication to tear you from your screaming flesh pure blasts of ecstacy... Pink bursts of orgasm sound-like the first furtive masturbation under the sheets when you were seven and overwhelmed with the force that gripped your body... Think back to your first trip and the wrenching triviality of any thing short of infinity. Chaos every where, in an explosion of free. This cassette is an aural documentation of Metastasis, an album released on RRRecords in the nowhere summer of nineteen eighty-eight. I affixed razorblades, plaster, nails, paint, junk to old records... Played loud, it carried Schoenberg's 'emancipation to the dissonance' to its fatal extreme. The music is created as the record is played; it is a constant flux, a 'pure presence' that won't kill you. This cassette is an autopsy. My only contribution to this tape was its authorization; all recordings and editing was done by Jeph Jerman."

Andrew Smith lives, released two tapes on Sounds For Consciousness Rape, and a 7" for RRRecords and one on Stomache. The record in the text above was an anti-record, which RRRecords released various of. Smith lives in The Netherlands these days. website