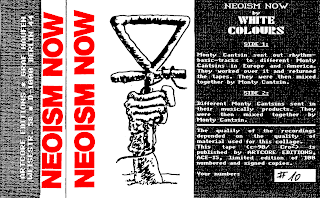 Another Neoist sound montage made up of fragments of music, noise and spoken words. Just like Monty Cantsin, "White Colours", originally a punk band by Stewart Home, was a multiple Neoist name that anyone could use. The liner notes of the cassette accordingly state that "different Monty Cantsins sent in their musically [sic] products. They were then mixed together by Monty Cantsin". It is no secret that that particular Monty Cantsin was Graf Haufen. He compiled this tape in 1987, shortly after the 64th International Neoist Apartment Festival in Berlin that had its opening in his own apartment.

The tape is, as obvious from the uniform title and graphic design, the audio complement to the book "Neoism Now" and the postcard box "Neoism Now" which were compiled and published by Graf Haufen at the same time. These three were the last products of "Artcore Editions", Haufen's small publishing house for tapes, print publications and art objects that had succeeded Graf Haufen Tapes. After their release, Graf Haufen joined the Neoist Art Strike, concentrated his efforts on his cinephile video rental store Videodrom that continues to thrive in Berlin, and hasn't resumed making music or art ever since.