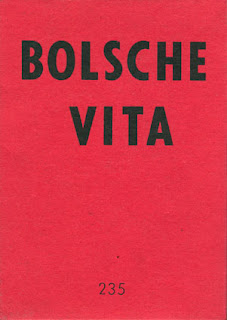 It seems that Megaupload has built in some delay before you can actually download something, which is a bit of a bummer, but alright. So a bit more of Der Werkpilot on this compilation, which also has EP4, Ash Wednesday, Kowalski, Diese Herren, Beaty Contest, Der Plan, Front 242, Bullworker and Das Moderne Ich. Quit rhythmic stuff. I didn't scan the entire thing but there were also 8 b/w postcards with this and an extensive text in German. Released by 235 Media which at that time was a pretty big (and expensive as far as I can remember) mailorder company from Cologne and who released this on their 2.35 anniversary.

Great. I bought this item back in the 80's. For years I tried to get a grip of that Ash Wednesday-tune.
Finally (thank God for Internet) I connected with him and bougt a couple of "homemade" CD's from his australian record company :-)