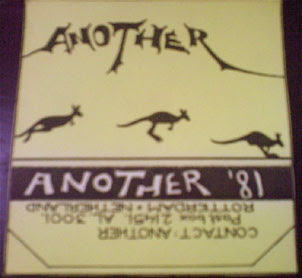 This tape was released by Charlye, the singer of Suspect, and I Suspect it was released in 1981, a year after he got kicked out of that band - check somewhere else on this blog for that story. If he -Charlye- has a better copy then this, please post it and we could change the link. This tape has no information on it whatsoever. Side 'a' says 'living room' and side b says 'live'. The living room recordings are quite ok. I gave the 'a' side songs titles but that's just guessing. The 'b' side is just one big file with the whole live gig. On my tape there's is one drop out spot which means that on both sides there's a song missing. But as it is a CHF 60, there's plenty enough to enjoy. I guess i bought this tape at Backstreet Records in Rotterdam in those days, maybe one of the few shops in the world that sold it. As far as i remember there's also a 7" from Another (posted before here - 433) and not much more...