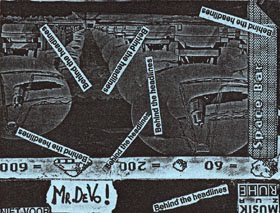 I got a bunch of tapes from someone who used to review independent tapes for a Dutch magazine (not Vinyl), and many are plain demo type of stuff, which we won't post, but also some interesting stuff. Mr. Devo released at least five tapes, which we all post, but four of them under the name of Mr. Dam, meaning Mr. Devo's Active Men, but for reason no longer clear this is as Mr. Devo. Electronic music with lots of rhythms and primitive sampling. Quite nice, despite the ugly presentation.