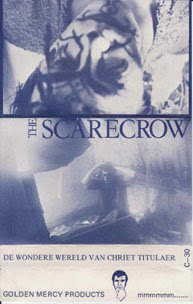 donated by Pascal 'titi' Tabarnac
This is the fourth Golden Mercy production. It is right that the catalogue numbering of this label was very messy but the first cassette was a compilation tape called 'BIOMUTANTEN' -it will be posted on this blog later. Maybe that was number zero, who knows. Anyway this little gem is some kind of a classic. Under all the tape hiss & distortion and dropouts (some of it because it is an old tape, but also because it was made 'Sound-On-Sound' -doing the overdubs on one track while the whole mix is on the other- on an old reel-to-reel two track Sony machine,) there are some very enjoyable songs here, all played and composed (except for the two covers) by one man, 'Skerkrau' for friends. This tape was the biggest seller that had hit Golden Mercy Records so far, meaning they must have sold at least 100 copies of it, maybe even more... As far as i know, this was the only solo 'records' Skerkrau ever made, later on he played in two bands; 'early' Dull Schicksal and 'late' Black Sheep. And for those who are not dutch; more references to that enigmatic Chriet Titulaer here. He was famous because of his peculiar beard and because he was THE outer space specialist in the Netherlands.

Thanks 433! Yes, his beard would make an Amish man proud.