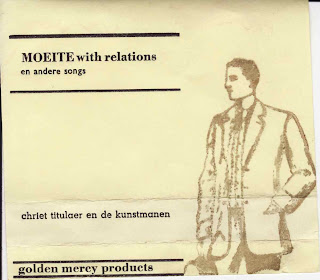 I am pleased to announce another new donator of excellent underground tapes, Pascal 'titi' Tabarnac, who I trust to create an excellent addition to this blog of truly delights of music.

Moeite With Relations by Chriet Titulaer & De Kunstmanen was the second GOLDEN MERCY release. It was made and recorded by a group of friends in the big livingroom of the squat they lived in. (Rotterdam, 1983, Crooswijk) Some of the stuff was recorded in the Poortgebouw by the people from Combinator Records, Kees & José. Also, the silly interview at the end of the tape is José ('deze cassette bezit andere kwaliteiten die niet zo onmiddelijk zijn af te meten in luistergenot') 'interviewing' Luuk Simonis. His reference to the magazine Vinyl was not a subconcious one; any cassette that was released was reviewed -or rather mentioned- by Oscar Smit, the man in charge of the cassette department.
As for as i remember this was the crew that made it; Theo Olsthoorn, Sander Jansweert, Eric & Yono, Kees & José, Stef ('steph'), Luuk Simonis, Sira & Jean Marc(?) en Eddie Bergshoef.
The sleeve was printed on an old printing machine (hand-composed) , owned by the small art collective 'het Rotterdams Kunstgesticht' Simonis was working with.
'Moeite With Relations' is a bit of a snapshot of the world we inhabited in those days; being on the dole, smoking dope, trying to make music or do anything else artistical, drinking endless cups of tea and trying our hand on this strange version of obscure 'cabaret', lots of toy-piano and badly played songs.

Seems on tape music everything is possible, thanks for this one.

TY, can't say I've heard of these guys or most of the stuff you've posted. You should have a rating scale on obscurity, say 1-10. 1 being a band like the Beatles and 10 being the most obscure, nobody knowing but the musician perhaps. It'd be hard to judge I guess, probably unecessary. Some blogs have similar scales like the trippiness or overall review of albums. Anyways fantastic website.

why a scale? just listen to some great weird stuff...

Just for cuiositys sake I suppose. I'm a little ocd so I like organizing things :)

Scrap that idea you're right. Awhile back you mentioned an ending to 433rpm I think. How far away is that?

well, with a new guy donating this and more to come its going to last a while more, but don't count on 2010

Hmm, well thank you new guy! 433 will be missed once the end comes. Alas all good things must come to an end.

Thanks for this one - great site!

About the future of your blog, wouldn't you still buy some rare and obscure music in the future? So you could still post it from time to time.