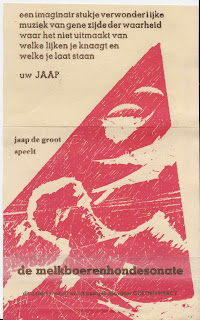 The third Golden Mercy release. This is basically the same story as the other two, except for the slightly changing line-up and the fact that the party had moved to the huge practise room in the attic where all of the MELKBOERENHONDESONATE was recorded. Other bands were practising there too, as Theo, our guitar player who lived downstairs, didn't seem to mind all the noise above his head. One of my fondest memories of those days; Cor Kotx (singer of Rotterdam noisepunk band KOTX, now deceased) pissing in OUR gutter on the roof. (well, 'fondest' is maybe slightly exaggerated -it just felt like we were part of 'the scene' as well. A scene that didn't exist as we found out later. Rotterdam was & is a collection of little people doing their little things in their tiny little houses, minding thier own business). well. 'Jaap De Groot Speelt' proves that we were developing in a band direction, a fact that would be celebrated by starting the band 'Dull Schicksal' not much later.
Crew on this k7; Theo Olsthoorn, Sander Jansweert, Evert van Atten, Luuk Simonis, saskia Leenes

note from 433rpm: Pascal 'titi' Tabarnac says this is the third, while 'De Nederlandse Cassette Catalogus' calls this gm 002. nothing on the cover.

Thanks, as always, very interesting.