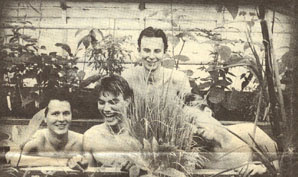 When Les Temps Modernes announced that they would be releasing several CDs with the work of Dutch band Minny Pops I was jumping for joy. 'Drastic Measures' is the best LP ever produced in The Netherlands in experimental electronics. Full stop. I was a bit disapointed that when all three CDs were released, there was some material missing. From both the third LP 'Poste Restante' and the fourth '4th Floor' only half the material is there. This post is whatever remained unreleased, as far as I can see. So those missing LP tracks, along with 'Mental', the Plurex live single (which I downloaded from the excellent Dual blog) and the freebie 7" 'Kogel/Stralers' which came with the second pressing of 'Drastic Measures'. As far as I can tell this sums up the entire recorded history of Minny Pops - and remember: buy CDs. These tracks may not be the most representative work by this great band, but if you do like them, buy the CDs! Thanks to Dual blog and paphio23. And oh, the photo comes from Muziekkrant Oor and is the band around the time of 'Sparks In A Dark Room'.

3 excellent posts waiting when I return after the weekend. It almost makes me look forward to coming to work on Mondays!

Thanks a lot, Frank

This is a darned cool post ... the tracks show a side to Minny Pops I didn't know they had. They actually sound like a real music group!

Fantastic, its 5.36 Sunday morning and I'm playing my vinyl copy of Sparks In A Dark Room and then I stumple across this awesome blog, thankyou so much for the extras.