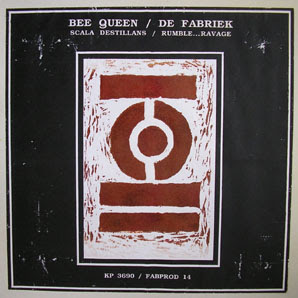 This record, produced by De Fabriek, has quite a story. Originally it was supposed to be a split between Bee Queen and De Fabriek, and each band would be paying half the pressing (of 250 copies), but De Fabriek 'sold' their side to Technological Aquiver, which were previously known as The (Lost) Attic, without telling Bee Queen. So the Beequeen/Korm Plastics version has an extra insert explaining this. The Technological Aquiver side was donated by paphio23, and the Bee Queen side was taken from the remastered CDR release on Plinkity Plonk. There is a mystery track on there, which I think is the run out groove of the record, so I trimmed that one minute. As a bonus I include also the two bonus tracks from that CDR release, which is a Beequeen split 7" with The Legendary Pink Dots and a track from the limited cassette release of the 7". Recently a double CD with old vinyl works by Beequeen have been released, which I also highly recommend (on Plinkity Plonk also)

ah yes. but as de fabriek would say: what's in a name?

Enjoying this Bee Queen stuff! It sounds so much like other things but isn't. One step either way and it would be pretentious twaddle or inept noise-mongering.

If you have more that would be great. Good job searching this out.

Heard the other week the author of TLA is no longer with us. RIP

where did you hear this?