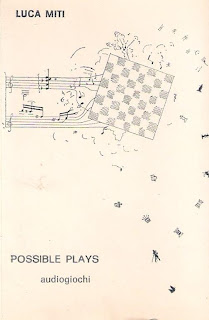 Luca Miti (born 1957) is an Italian composer and pianist.
He studied jazz piano, extended vocal techniques and baroque flute a bec. From 1980 he's working as a composer and performer of contemporary music. His work is centered on a deep research on, over and beyond "sound". He collaborated extensively with such artists as Albert Mayr, Francesco Michi, Alvin Curran, Mauro Orselli, Michiko Hirayama and others. His repertoire consists of "difficult-to-find" compositions (Riley's Keyboard Studies, Takehisha Kosugi's works, Alvin Curran's lesser known compositions). He is a dedicatee of works by Tom Johnson, Pauline Oliveros and others, and an album of those works is planned for release. His recordings are available through SILENZIO distribuzione, notably the first co-titled LP records, "Musiche Sole" (with Roberto Barbanti and Letizia Bolognesi) released by Electronikaruna. The second solo output, "Mansions" was originally released (1999) as a co-production Silenzio Edizioni/Electronikaruna as a cassette tape and is now re-released with two more tracks in the CD format by ants.