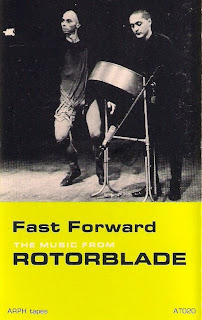 Percussion music from this musician for a dance company. Fast Forward is a New York based english composer and performer who makes music with almost anything. In the early seventies, he studied media and performance with Stuart Marshall in Newcastle, England. In 1976 he emigrated to California to study electronic music with Robert Ashley and David Behrman at Mills College in Oakland. He moved to New York in 1981. In addition to his own music, he has produced music and musical events for various artists and organisations. In 1993 in conjunction with The Wooster Group, he curated "The Accident" nine evenings of performance music at The Performing Garage in New York City. He has toured extensively as a guest composer and musician for The Merce Cunningham Dance Company. He has composed and performed music for numerous dance companies and choreographers.
Some musicians who have performed Fast Forward's music include : David Behrman, Yuval Gabay, Anthony Coleman, Guy Klucevsek, Takehisa Kosugi, Ikue Mori, David Moss, John King, Ben Neill, Vicki Bodner, David Shea, William Parker, Chris Cochrane and Min Xiao Fen. He has collaborated and performed live with Fred Frith, Takehisa Kosugi, David Moss, Christian Marclay, Rhys Chatham, Samm Bennett, Ikue Mori, John Gibson, Pauline Oliveros, Masahiko Kono, Yasunao Tone, Kazue Sawai, Gerry Hemingway and Ron Kuivala to name just a few.